A Noble Groom by Jody Hedlund

Recently widowed Annalisa Werner has the feeling her husband was murdered but can’t prove it. Alone with her young daughter in 1881 Michigan, she has six months left to finish

raising the money needed to pay back the land contract her husband purchased, and the land is difficult to toil by herself. She needs a husband. With unmarried men scarce, her father sends a letter to his brother in the Old Country, asking him to find Annalisa a groom.

For nobleman Carl von Reichart, the blade of the guillotine is his fate. He’s been accused and convicted of a serious crime he didn’t commit, and his only escape is to flee to a small German community in Michigan where he’ll be safe. He secures a job on Annalisa’s farm but bumbles through learning about farming and manual labor.

Annalisa senses that Carl is harboring a secret about his past, yet she finds herself drawn to him anyway. He’s gentle, kind, and romantic–unlike any of the men she’s ever known. He begins to restore her faith in the ability to love–but her true groom is still on his way. And time is running out on them all.

Growing up, almost every little girl dreams of the fairy tale kind of love. We wait for the “perfect” man to appear in our lives and sweep us off our feet (maybe not literally, but you get the idea!).   Fairy tale love is part of what makes Annalisa so likeable, because every woman can see a little of herself.  It is the kind of story where you are drawn into the lives of the characters in a way that leaves you thinking about them long after you have put the book down. I read, A Noble Groom, in four days, because I kept coming back to my Kindle wanting to read just a little more. Once I reached the end, I felt such mixed emotions. I was happy with the conclusion, but sad to see the story end, all mixed in with a little bit of that fairy tale love running through my veins. I read another reviewer who said she sighed when she finished. I had to laugh, because I did, too! It was just that kind of sweet ending. Awesome!

A Noble Groom is about so much more than the love story between two people.  It is the story of honor, duty, and loyalty. It is about being the best person you can be regardless of the circumstances. It is a story of hope and above all a story of love, not just the love between Carl and Annalisa, but the love of  God.

I was so touched by this story, that I emailed Jody Hedlund and asked her a few questions. She was extremely gracious and has joined us to today.  I hope you enjoy reading how, A Noble Groom, came to be such a wonderful book.

Hi Jody! Thank you for taking the time to be with us today. 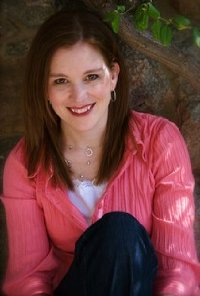 Thank you for doing this! I appreciate it so much!

My first question relates to the characters. Did you have a favorite character in this book?

I think that I fall in love with each of my heroes every time that I write a book! But I’d have to say that one of my all-time favorites has been Carl from A Noble Groom.

Do you enjoy writing from the male perspective? I thought you did an amazing job. It was one of my favorite parts of the book!

Writing from a male’s perspective can be tricky at times. Not only do I try to stay in a man’s voice, but I also try to craft that voice into the unique personality that belongs to that particular man.

What was your favorite scene to write?

I really enjoyed writing the fire scene where Annalisa and Carl are hiding in the well trying to survive the Great Fire of 1881. I tried to tie in to what really happened when a major weather front moved through the area bringing violent winds, the fires fanned into a raging inferno. Witnesses reported that in some places the fire marched in a great wall of flames, sometimes one hundred feet high. It moved across Michigan’s Thumb area in four hours, burning and destroying lives until finally it reached Lake Huron and burned itself out.

Hundreds of cattle, sheep, and hogs lay dead along the roads. Few trees and buildings were left standing. Nearly 300 people died and thousands were injured and homeless. Some took refuge in wells and survived while others suffocated. Some buried themselves in fields, took refuge in root cellars, or in rivers. Those closest to Lake Huron sought refuge in the cool waters of the lake and found themselves standing next to wild animals.

When do you write and where?

I write all over the house and at all times of the day (whenever I can squeeze in the time!). When my husband is home to supervise the kids and household, I usually close myself away into my “office” (which is a small desk in a corner of the master bedroom). When my husband isn’t home and I’m trying to work around the kids, then I usually sit at the kitchen or dining room table so that I can see everyone and everything that’s going on (with my headphones in, of course!).

How long did it take you to write a Noble Groom?

I worked on researching and plotting A Noble Groom for about a month. And then the actual writing of the first draft took me about five months.

You mentioned plotting. Are you a plotter or a seat of the panster?

I am a plantser (plotter + pantser). I tend to plot out the big-picture road-map of my books. But then I let the story develop and grow as I write. I often take detours and new leads which is the really fun part about writing.

I couldn’t agree more, Jody!  Thank you so much for joining us today.  It has been delightful to talk about your new book, A Noble Groom.

Visit the following sites to purchase, A Noble Groom:

4 thoughts on “Book Review: A Noble Groom by Jody Hedlund”